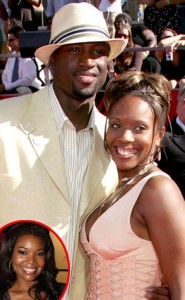 Siovaughn Wade was M.I.A.  for a court appearance today related to the custody hearing of her 2 sons. Dwyane was there. Why couldn’t the soon-to-be-Ex-Mrs. Wade make it? The Judge presiding over the case seems to have developed a theory as to what’s taking place. She made these remarks according to USA Today:

Cook County Circuit Judge Marya Nega said she was tired of what she called a pattern of behavior by Siohvaughn Wade throughout her contentious divorce from the basketball player and Chicago native.

“When things don’t go according to Mrs. Wade’s way all of a sudden the phone’s turned off,” said Nega, clearly exasperated when Siohvaughn Wade’s attorney explained she had not been able to reach her client.

Dwayne Wade’s attorney had planned to ask Monday that his client be given physical custody of the couple’s two boys, ages 8 and 2.

The judge said Siohvaughn Wade had refused to comply with other orders. For example, Nega said, Siohvaughn Wade has not followed an order to make sure the couple’s two children talk to their father every day. Nega also noted the children were not at their Chicago school last week to be picked up by Dwyane Wade’s sister as the judge had ordered.

The judge said her main concern was what the couple’s ongoing divorce was doing to the children and suggested she may order custody be given to Dwyane Wade.

“Maybe it’s time for the kids to go live with Dad for a month or two,” the judge said.

Perhaps details of Mrs. Wade’s mental state were valid in the claim filed by DWade back in March. Details here

Siovaughn’s attorney, Marsha Fisher, told the judge that her client had heard that Fisher had been in a car accident and thus thought she didn’t have to be in court today.

What??? If that was the case why didn’t Ms. Fisher ask for a continuance. Wouldn’t someone from Ms. Fisher’s office have had to actually contact Mrs. Wade? Her lawyer isn’t starting off on the right foot to build confidence (unless she’s just playing with the cards she’s been dealt by Siovaughn which takes us back to the point above…)

Behavior like this contributes to the idea that she is simply bitter and scorned. Her actions have been erratic (filing suits, dropping them only to revisit the topics again etc.) since the details of the case began to spill out to the public over a year ago.

From the outside looking in, it appears that Dwyane’s version of events has been the most consistent. He hasn’t blown off court dates (even during the season), None of his suits have been dropped to my knowledge and most importantly, you don’t see the Judge giving him a public scolding.

Your first concern is that nothing has happened to Siovaughn once it’s known she’s physically ok, one has to wonder if  giving her some time away from the kids is what she really needs.

Can this divorce get any nastier? #TeamWadeKids