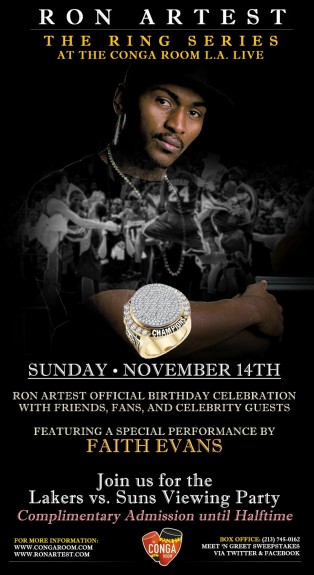 No scandal here, Ron Artest celebrated his birthday last night in L.A at the Conga room after the Lakers were handed their 2nd lost in a row at the hands of the Phoenix Suns. Faith Evans performed, a few of Ron’s teammates and an interestingly dressed David Arquette also made it out to celebrate.

Personally, I’m glad these 2 loses have taken place. The Lakers are a team that plays better with something to prove. A chip on their shoulder. They started the season out with that intensity because of an off season where the Heat and it’s super friends overshadowed the reigning champions.

Once the reality of the Heat’s situation became clear, the Lakers began to play disinterested (the game against the T-wolves last week comes to mind). Anyway, check out the pics from Ron’s party. He’s planning 2 more, 1. to give away his championship ring, the other on Christmas night which hopefully will be a victory party once the Lakers smash the Heat.

I’m sure Ron performed his stuff too right? I mean isn’t that half the fun in going to an Artest event??